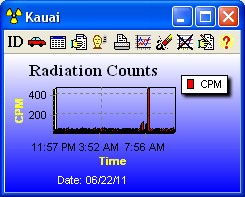 Yesterday, June 22nd, our network’s Monitoring Station on the island of Kauai, within the Hawaiian island chain, broadcast yet another Radiation Alert over the Network, at 8:08 A.M. local time – a 3 minute surge of 209, 456, and 186 CPM (Counts per Minute) respectively, accompanied by a generally elevated level leading up to that, and followed by another blip at 2:52 P.M.

The Kauai station indicates it was raining at the time, so we believe the precipitation brought down Fukushima fallout from the atmosphere.

This detection follows a similar, sustained elevated radiation level from the Kauai station on June 10th.  Other than this, since the nuclear disaster in Japan, the stations on our Network that we believe to have detected Fukushima radiation in significant and noticeable levels have been limited to a couple of high altitude stations in Colorado, and an obvious one in Japan itself.

So the question is, “What is so special about the Kauai station?“.  In answer, I think we what have here is “the perfect storm“:

So there is your “perfect storm” – in relatively close proximity, amidst a rainy environment, set up for outdoor monitoring, and using an ultra-sensitive detector.

The next order of business is to place additional monitoring stations around Kauai, in both high rainfall and rain shadow areas to provide confirming readings and to test out some of the theories offered above.  We also need to correlate detections with weather patterns and movements of the jet stream, combined with any verifiable “releases” of radiation from Fukushima.