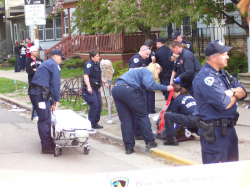 What we are now witnessing is the slow motion unraveling of America.  Our economy is dying, the American people have lost faith in the government and in almost all of our other major institutions, and our society is collapsing.  Most Americans don’t understand why all of this is happening, but most of them do realize that something has fundamentally changed.  Earlier this year, McDonald’s held a “National Hiring Day” and a million Americans showed up to apply for jobs.  Only 62,000 of them were hired.  That means only 6.2% of the applicants got jobs.  So what are we supposed to tell the 93.8% that didn’t get hired?  Are they supposed to have any hope for the future when they can’t even get a minimum wage job at McDonald’s?  When I was a teenager, I went over to McDonald’s one day, filled out an application and was instantly hired.  My, how things have changed.  Now we have millions upon millions of young people that are staring directly into a very bleak future.  The level of frustration in this country is rising to frightening levels and large numbers of people are already showing that they will stoop to anything in order to survive.

In a recent article entitled “18 Signs The Collapse Of Society Is Accelerating” I focused primarily on the chaos that has been erupting in many of our urban areas.  But the truth is that, as you will see below, there are signs that society is collapsing coming out of very rural areas as well.  This phenomenon cannot just be pinned down to one area of the country or to one group of people.  From coast to coast people are already starting to lose it and the economic collapse has only just begun.

The cold, hard reality of the matter is that what we are experiencing right now is rip-roaring prosperity compared to what is coming down the road.

So if people will behave this wildly now, what is our society going to look like someday when there are millions of Americans that have not had anything to eat for several days?

That is something to think about.

History has shown us that when people are really, really hungry they will do just about anything.

But right now we are not even close to that point and yet people all across America are going crazy.

The following are 12 more signs that society is collapsing….

#1 In my previous article, I detailed how the “mob robbery” phenomenon in Chicago is spinning wildly out of control.  Well, just this morning, the brother of Billy Corgan (the front man for the Smashing Pumpkins) was mugged and had his iPod stolen by a mob of teens while he was riding a Red Line train in Chicago.

Things have gotten so bad that now even The Wall Street Journal is taking notice of the rash of “mob robberies” that have been happening in Chicago.  The following is how a new article in the Journal described one of the recent attacks….

In another incident last Saturday evening, Krzysztof Wilkowski, after shopping on Michigan Avenue, was sitting on his scooter a couple of blocks away checking his phone for a restaurant when he got whacked in the face with a baseball.

At first, he said, he thought it was a prank, but then he looked up and saw 15 to 20 young men approaching. “My first reaction was, ‘I’m about to get robbed, what do I do?’ ” Mr. Wilkowski recalled in an interview.

The 34-year-old insurance company employee from a Chicago suburb grabbed the keys from his ignition and held tight to his phone. A few of the attackers dragged him off his scooter and pulled him onto Chicago Avenue where they punched him, hit him with his helmet and tried to grab his phone.

#2 Sadly, “mob robberies” are not just happening in Chicago.  The following is a video of a mob robbery that took place in Stockton, California….

This next video is an Associated Press video report about how police have become extremely concerned about the “flash mobs” that have been plaguing Philadelphia lately…..

This is a very, very disturbing trend.  Once these videos go up on YouTube, other groups of young people “copycat” them all over the country.

The next 10 signs are from some of my readers.  In response to my previous article that discussed how society is collapsing, a number of people left comments that described what is happening in their particular areas.  Sometimes so many dozens of comments get left that some real gems get overlooked.  The following is a sampling of what my readers have been sharing about how society is collapsing where they live….

About a month ago I was robbed in broad daylight walking to the store on a picture perfect 75 degree sunny day at 1 PM by two high school dropout teenagers on the path in my nice suburban town which is located in third richest county in America! A few months before that I was beaten unconscious by random drunk young people on the path near my home that I woke up in the hospital getting stitches in my face. This will be one dangerous summer for places all across America.

I live in Fargo,ND and we have been having a rash of crime lately. In the past 6 months we have had multiple gas station robberies, bank robberies, and the latest, a shooting at one of our three movie theaters.

I am a teacher in Ogden, Utah and this last winter I had a second grade student tell me that if I didn’t tell him how old I was that he was going to “shoot me in the back of my head.” He was suspended from school because that is a threat of violence, but nothing changed. His parents are active gang members.

I live close enough to Columbus, OH to follow the news there. (Thankfully far enough away not to be regularly affected by it.) Every day there is a new report of a violent crime. I believe we are up to 70 or so murders on the year. 10 years ago this wasn’t the case. I could (and did) walk into the worst part of the city and be safe as long as I was vigilant. I wouldn’t try that for the world now. I used to be a bank teller there and there’d be maybe 1 robbery a month throughout the city. It’s at least one a week now, probably more than that. And it’s no longer the downtown banks that are getting robbed–it’s the suburban ones.

I live in Atlanta Georgia. Everyday there are signs. Today’s headlines are: Babysitter kills toddler, 2 shot outside teen party, Brick thrown from I-75 overpass and several more.

The first, a 21 year old pizza delivery girl who was held with a knife to her throat while making a delivery. They took all the money she had on her and even took the time to search her car! The second was a 30 year old woman who told me she was walking down the street and was solicited by a pimp telling her she could “make good money”. After she told him to get lost, he stabbed her in the back of the arm. She needed over twenty stitches and showed me the wound.

Even in Fairbanks, Alaska, there has been similar “mob robbing” going on. Yes, it is spreading everywhere.

I’ve also seen a huge increase in theft, vandalism, sexual assault, and violence just in the past couple of years. This is in a city that used to make the list in top places to live in the U.S. year after year.

I live in Richmond California aka the city with the 2nd highest murder rate next to New Orleans, aka the city where the probability of you being killed is 5x higher. It is getting very serious out here, and luckily I don’t live in the rough part, however I go to the rough part to try to witness and preach. People are walking zombies. At any point their lives can be taken but the fact is, this is all they know. It is completely hopeless and when you wrote about “American Hellholes” I live in one. Richmond, CA is a post-industrial warzone. I work in the manufacturing industry, and I got here not long ago, but if you just drive through the city, the boarded up homes and abandoned warehouses tell the tale of how a deindustrialized city quickly turns to a battlefield.

In my area we have been able to sleep well enough and always known our neighbors – up until a few months ago I did not lock my cars or my home most of the time – there was no need. That has changed, neighbors are now siphoning gas out of cars from desperation, and stealing scrap lumber, metal, livestock, produce and anything else they can get their hands on to sell or eat. Over the last year or so the police departments of some areas have started taking these seriously and actually investigated and caught a few. They are sometimes groups of people working together to amass resources to sell. We now keep a vigilant eye on our little flock of chickens and we have a colony of rabbits as well. We no longer “free range” them on our property at all – the risk of theft is too high if others know we have them. We keep any resources away from the road on the back side of our property – we also keep two German Shepherd Dogs for guarding our property. Living in the country is NOT what it used to be.

Sadly, this is just the beginning.

This is just the tip of the iceberg.

As the economy collapses, the chaos is going to get a lot worse.

I wish that wasn’t true, but this is the world we live in now.

The recent article I did about the “economic hell” that American families are going through right now got a huge response, but honestly what we are experiencing right now is not even worth comparing to how nightmarish things are going to be when our economic system fully collapses.

We have been on the biggest debt binge that the world has ever seen.  Our debt-fueled prosperity has enabled us to enjoy an unprecedented standard of living.  But the largest debt bubble in the history of the world is going to pop, and when it does the party is going to be over.

You better get ready.